The emerging stalemate in U.S.-China trade negotiations reflects a breakdown in trust and widening differences that are unlikely to be resolved soon.

At the center of the dispute is an earlier deadlock over how and when to remove existing American tariffs that provoked Beijing to threaten quit the talks, according to people briefed on recent discussions.

Both the U.S. and China tried to project calm since the latest round of discussions ended on Friday and said that they plan to continue negotiations in the hopes of avoiding a tumble in markets and broader economic damage.

But that facade masks fundamental divisions, with U.S. officials increasingly convinced that hardliners in Beijing are winning the internal debate on reforms.

President Donald Trump continues to weigh in on the state of negotiations, saying the U.S. was “right where we want to be.” Meantime, Chinese state media blamed the U.S. for the impasse and talked up its economic resilience, with the People’s Daily saying in a front-page commentary that the U.S. should take full responsibility for the setbacks because it went back on its word and imposed more levies.

The ongoing uncertainty means more turmoil for financial markets: Stocks in Asia fell along with U.S. and European equity futures, the yuan and Treasury yields.

The latest breakdown has prompted an escalation in the tariff war between the world’s two largest economies that looks increasingly like the International Monetary Fund and others’ worst-case scenario for a global economy already forecast to grow this year at its slowest rate since the immediate aftermath of the 2008 financial crisis.

On Monday, U.S. officials are expected to announce details of their plans to impose a 25% additional tariff on all remaining imports from China — some $300 billion in trade. Beijing is still working on its own retaliations to last week move by Trump to impose a 25% punitive tariff on more than 5,700 products worth some $200 billion annually.

Larry Kudlow, Trump’s top economic adviser, said on Sunday that no further talks had been scheduled, though he raised the possibility that Trump and President Xi Jinping will meet on the sidelines of a Group of 20 summit in Japan at the end of June.

In an interview with Fox News, Kudlow played down the economic impact of an escalation of tariffs by both sides, while conceding that economists and businesses were right when they challenged Trump’s assertion that China was paying the cost of the tariffs. 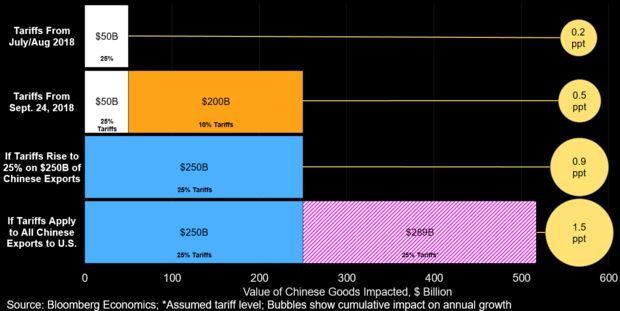 Losing some U.S. jobs and taking a hit to growth was a reasonable risk to take to correct “decades” of unfair trade practices by Beijing, especially because the U.S. economy is strong, Kudlow said.

The move to extend tariffs to all remaining imports from China would take several months, Kudlow said. But the tariffs remained part of an effort to get China to end its theft of intellectual property and other economic practices rather than a longer-term economic tool, he said.

While the Trump administration has taken that line for months, there are also some signs the president’s self-proclaimed fondness for tariffs may be backfiring.

According to people close to the talks, as the sides marched toward a deal that they hoped initially to close last week, they had gotten stuck in recent weeks on the question of lifting the U.S. tariffs in response to Chinese steps to address American complaints. When the U.S. insisted that it would leave tariffs in place, the Chinese threatened to blow up the discussions, according to two people familiar with the discussions.

That was followed by China’s early-May move to — according to U.S. officials — backtrack on its agreement to enshrine concessions in law, offering instead to issue directives by the State Council. That reversal spurred Trump’s move last week’s to raise tariffs from 10% to 25% on a $200 billion tranche of imports from China.

Last week’s talks between Vice Premier Liu He, Xi’s top economic emissary, and U.S. Trade Representative Robert Lighthizer and Treasury Secretary Steven Mnuchin, were focused on that changing commitment but made little progress, according to people familiar with the discussions.

Lighthizer and his office didn’t respond to a request for comment.

In a series of editorials over the weekend, Chinese state media fired back that the U.S. was provoking an escalating trade war that would in the end hurt Americans more than China.

“If the U.S. is to play a roller-coaster-style thriller game, it will bear the consequences,’’ the state-run Global Times said in an editorial.

Trump’s hard line on China has been largely cheered by politicians in Washington, though Democrats have accused the president of alienating allies who might help apply more pressure on Beijing. But concerns that an escalating tariff war may end up hurting the U.S. economy are also growing.

“The longer we’re involved in a tariff battle or a trade war, the better chance there is that we could actually enter into a recession,” Republican Senator Rand Paul said on ABC’s “This Week” on Sunday.

This article was originally posted on Bloomberg.com on 13th May 2019. To read the original post, click here.

Fortune: Uber Is One of the Worst Performing IPOs Ever